Vielen Dank!
Ihre Nachricht wurde erfolgreich an uns versendet - wir melden uns bei Ihnen!
Home / Industries
Currently there are no tools on your notepad
You have questions about our tools?
Contact
Phone: +49 911 99574115
tools@psyma.com
There are currently no Impuls-Sessions on your notepad
Request desired appointment
Contact
Phone: +49 911 99574115
impulse@psyma.com

The story of Psyma begins in 1957. Three research associates from the psychological institute at the University of Erlangen set up the “working group for psychological market analysis” in Nuremberg. As an international market research agency we now work with 260 employees in over 40 countries with passion and tangible enthusiasm.

Learn more about the history of Psyma

In 1957 the “working group for psychological market analysis” was founded in Nuremberg by three research assistants from the Psychological Institute of the University of Erlangen with the aim to conduct psychological market analysis. One of the founding members was
Dr. Klaus Haupt. Research topics during this time included new developments and color design of household cleaners and the respective product claims, the image of luxury watches, images best suited for instant coffee or the psychology of the car owner/ driver and finding the optimal positioning for car brands. The methodology of these studies was largely exploratory, in-depth interviews using projective techniques stemming from diagnostic clinical psychology.

According to the business magazine, “Capital”, Psyma is the “largest motivational research agency in Germany”. The customer list at the time reads like a who’s who of the branded goods industry: Henkel, Maggi, Nestlé, Daimler-Benz, BMW, Reemtsma, Beiersdorf, Sprengel, Lufthansa and many more.

In 1967, Reinhold Dorn launches a new department specializing in pharmaceutical market research – a novelty at that time in Germany. He also triggered the development of computer-aided methods suitable for psychological market research.

The brand name, “Psyma” as an abbreviation of the company name was created to save on costly transmission time during a period when the telex was still a very common form of communication.

Development of the first Psyma logo

Move into the Rueckersdorfer “main building”.

Opening of test studios to carry out exploratory individual surveys and group discussions in Nuremberg, Hamburg, Stuttgart and Cologne.
New techniques such as one-way mirrors, video and audio recordings became a standard set-ups in studios.

Participation in institutes for telephone surveys and quantitative personal surveys.

The range of methods is extended to include explorative-qualitative procedures to quantification and complex model simulations.

Matthias Fargel joins Psyma and based on his knowledge and background of overseas markets he extends pharmaceutical market research beyond Germany and research is now conducted globally.

Founding of a separate company for International Pharmaceutical Research under the management of Matthias Fargel – Psyma International Medical Marketing Research GmbH. Around the same time, there is an increasing interest in global markets for consumer products with companies such as adidas, Reemtsma, Quelle, Storck and many others.

Dr. Klaus Haupt terminates his position as Managing Director and appoints Bernd Wachter who together with Reinhold Dorn and Christian Ryssel make up the new Management Board. In the same year, the first website evaluations and online studies are carried out. This is followed by the founding of Psyma Online Research GmbH, a pioneer of German online research under the management of Dr. Frank Knapp.

Opening of another Psyma branch in Munich with Christina Eisenschmid as Managing Director. The focus of this branch is international automotive and financial market research. In the same year, Thomas Kolbeck joins the company to head up the department for media and TV research and sports and consumer goods at Psyma’s headquarters in Rueckersdorf.

Christian Ryssel moves from CEO to the Supervisory Board. Matthias Fargel is appointed CEO.

A whole series of new companies are launched: Psyma together with the French specialists, Gérard Confrère and Nadège de Fontenay, create the company Inter-View Partners (IVP) France, a pure field agency in Lille for demanding surveys in France. In the same year, a full-service agency, Psyma Ibérica, was established in Madrid / Spain under the management of Ignacio Macias with his business partners Nuria Fernandez and Carlos Moreno. Also in 2005, after more than a decade of market research in China, Psyma started a joint venture with Lisa Zeng, Psyma Business Research China in Shanghai.

Founding of ODC Services GmbH, an operating company for international online access panels and related services together with other partners.

To build on synergies and optimize resources, Psyma Psychological Market Analysis GmbH (the successor of the original “working group for psychological market analysis”) merged in 2006 with Psyma Online Research GmbH to form Psyma Research + Consulting GmbH, based in Rueckersdorf.

Opening of the office in Barcelona, Spain.

Change in the management board: Bernd Wachter is appointed CEO and Chairman of the Management Board, Dr. Frank Knapp is appointed Deputy and CIO.

Opening of the office in Detroit, USA with focus on automotive market research.

Complete relaunch of our corporate identity.

Change in the supervisory board: Hans-Jürgen Beger replaces Reinhold Dorn.

The “Context Institute Turnover List”, published annually in the trade journal, Research & Results, again shows that in 2016 Psyma is on a growth course and remains Germany’s largest privately owned market research agency with a turnover of € 32 million.
Contrary to the industry trend at this time, PSYMA GROUP AG was able to achieve the largest increase among the top 10 agencies with a 5% increase in sales.

In August 2017, with the introduction of a quality management system based on DIN EN ISO 9001: 2015 and ISO 20252: 2012, Psyma develops further prerequisites to gain and win trust in the future of the PSYMA GROUP among clients, employees and suppliers. Strengthening quality management on a large scale as support for a better society.

Dr. Klaus Haupt dies at the age of 87. The founder of Psyma was a true entrepreneur with a vision for the future who never forgot his social responsibility. We will miss his human and friendly nature and we will always keep him in honorable memory. 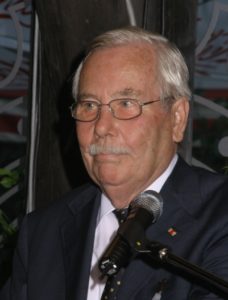 2022
Psyma Health & CARE and Exevia merge and operate together under the name Psyma+Exevia Health GmbH.